Have you seen the Labyrinth? Have you seen it 3019 times? Campbell has. We have a quick chat to a lover and collector of all things Jim Henson.

So, tell us a bit about yourself?

My name is Campbell and I am the Chief Learning Architect for a major RTO in Melbourne. I love my job because it is a field where I can mix both my creative and technical skills equally. I am constantly learning new things and have great variety in what I do.

On any given day, I use so many different skills. I can be writing either technical or creative, web design, graphics production, animation, simulation creation, collaboration or planning. So yeah, basically I design and develop learning experiences for different purposes. Essentially, I make learning fun and engaging.

You’re a massive Jim Henson fan, when did your interest in him begin?

When I came to Australia I stayed at my cousin’s place for six months. I was only 4 and we watched the Muppet Show religiously, Sesame Street and later in life of course, Fraggles. I was hooked.

What is your hands down favourite Jim Henson movie?

Labyrinth, hands down would be my favourite, I have seen it a total of 3019 times, 12 of which I saw in the cinema when it first showed in 1986 in Shepparton Twin Cinemas. I still have my ticket stubs. I love Labyrinth for many reasons. One part is the whole ‘true’ fantasy factor. The design was both original and deeply wonderful, based on Brian Froud’s concept design, Terry Jones’ screenplay and Jim Henson’s puppet magic.

I haven’t left myself nearly enough room to express everything that’s impressive about the film’s artistry. Suffice to say, the design, puppetry and script are imaginative, funny, intricate and just plain lovely. That aside, the premise and overall themes of ‘friendship’ and ‘not giving up when times are tough’ resonated with me a lot. Plus I love David Bowie’s music. 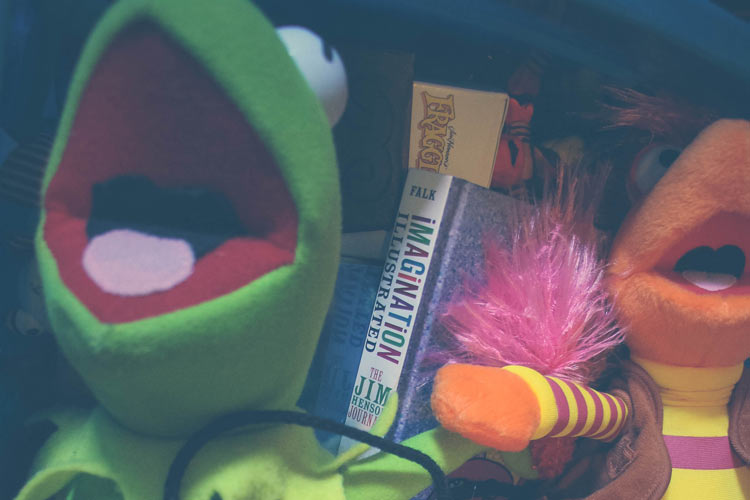 How many items of Jim Henson paraphernalia do you own?

The number of items I have are in the thousands, ranging from a personally autographed photo when I went to the Jim Henson Studios to all of the dvds of all the tv shows and movies, with plushies, figurines and books just to name a few.

Do you own any special ‘collectors’ items?

Aside from the personally signed photo, which I love very much, I also have a few rare items like a Gonzo purse (only 200 ever made) and a very unique framed muppet picture.

Who is your favourite Jim Henson character and why?

I have a few, I am a big Hoggle fan in Labyrinth because I fee as though he is similar to me, I am also a big fan of Wembley Fraggle for the same reason. As far as the Muppets, I love them all and I do a mean Kermit impression.

Do you have any interesting facts about Jim Henson that you can share?

Jim Henson may not have his own star on Hollywood Boulevard but Kermit the Frog does.
The Muppet Show was originally rejected by network executives.
Jim’s son Brian regularly emails me.

For anyone growing up in the 70’s and 80’s, the Muppets were an enormous phenomenon. Give us your take on what the Muppets did for TV.

Muppets for me brought happiness, morals, the message of ‘it’s okay to be unique’ and ’embrace your creativity’. All things I adhere to on a daily basis.

A quote that I like from Jim is “My hope is to leave the world a bit better than when I got here” but my favourite quote from Labyrinth is “I need you. I don’t know why, but every now and then in my life, for no reason at all, I need you.”

Thanks to Cam for sharing his story. What do you collect? Share with us in the comments.