When I found out I was expecting a baby, travelling the world was not my first thought.. Or second.. Or even on my radar at all. However, when David and Ivalu got their joyous news that’s exactly what they decided to do. Ivalu’s lineage is of the Inuit, a nomadic people who travel all year round, even with their babies. Together they decided that now would be the perfect time.

Starting from their home in Norway they spent 6 months in Greenland where little Nivi was born. Then on to Morocco and Australia. After spending some time in Central Victoria visiting with family, they headed off to Tasmania for an extended stay.

From Tasmania they ventured into the warmer climate of India. Ivalu was going to undertake an intensive yoga teacher training course on the banks of the glorious Ganges in Rishikesh, India.

I’m quite the home body, not venturing too far, so naturally was curious about the how’s, why’s and what’s. Ivalu was kind enough to share some of her experiences in India. My thanks go to Ivalu for sharing her story of learning Yoga training in India with us. I hope you enjoy both her story and photos.

The yoga philosophy was very important to me and really confirmed what I already know: that happiness cannot be bought in materialism. Happiness comes from within you.

We arrived three days before the course started. We flew directly from Melbourne to Delhi and from Delhi to Dehradun, Jolly Grant Airport. It was already hot at 30 degrees Celsius when we arrived and summer had only just begun.

The yoga school is located in Laxman Jhula in the Northern end of Rishikesh.

We took a taxi to Rishikesh 20 kms away stopping at a little plaza where people sold Chai tea and crowds were going in all directions. Some girls approached us, they wanted to take photos of Nivi – Nivi is blonde with blue eyes, a rarity in Rishikesh.

The three of us were met at the temple by Yogi Sidharth and were accommodated in the yoga school (called an Asram). 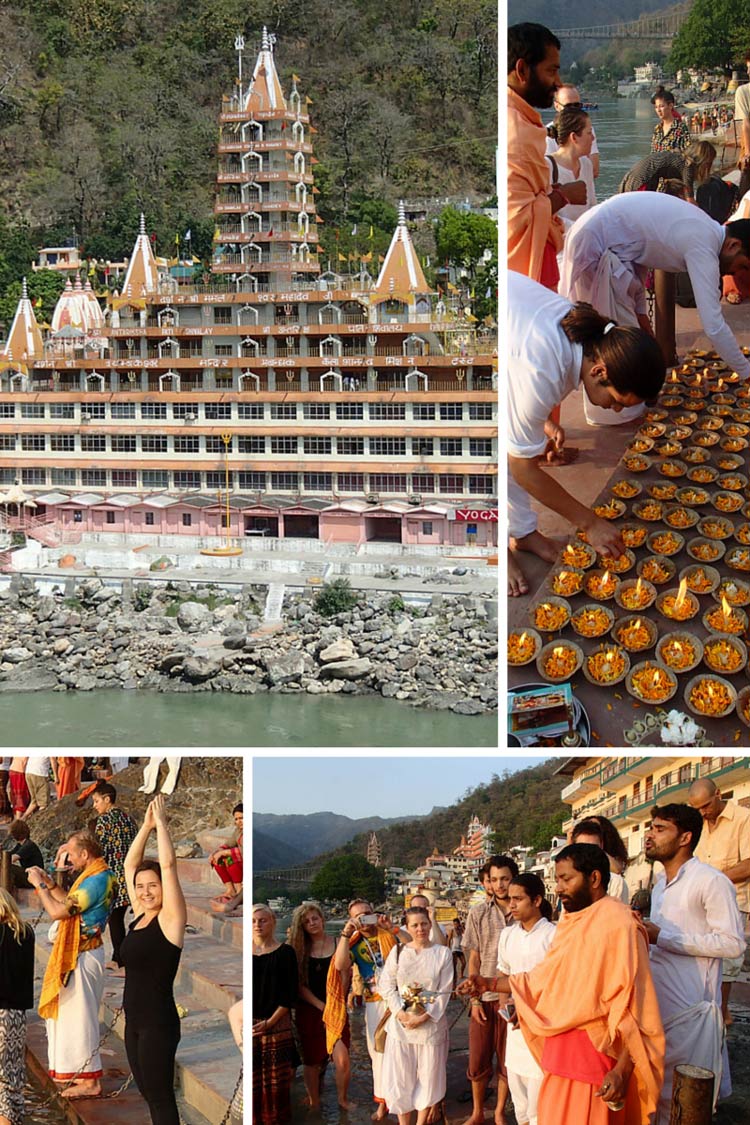 Our room was basic, with two single beds, a table, chair, closet and a bathroom with hot water. The room overlooked the Ganges River with a balcony, so we sat outside watching the action both on and by the river; there were people praying, bathing and rafting. At night on the stairs below our balcony, there were people playing music, singing and dancing, which we all enjoyed.

Some residents complained about Nivi crying at night, so we moved to a hotel just 10 minutes away. This room was simple, with a huge shared balcony overlooking most of Laxman Jhula (North of Rishikesh) and the Ganges river.

The yoga teacher training course itself was 200 hours (squeezed into four weeks) and ran most days. The first day started with a two hour fire opening ceremony, prayer and singing.
All 30 course participants gathered in a circle, received three books each and went on to describe their reason for being there. Their reasons were many and varied. Some wanted to be more disciplined in their own yoga practice, some wanted to be yoga teachers, and others just felt they were a bit lost and needed some guidance in achieving a healthy lifestyle.

Every day started at 6am with meditation and pranayama (breathing exercises) or cleansing exercises, like the nose-cleansing with a neti pot.

Then we’d do Ashtanga Yoga for 2 hours. During the four weeks we covered 75 different poses, learning how to do each pose correctly. Ashtanga yoga is a type of dynamic and powerful yoga which really gets you warm and sweating.

There would be one hour of Philosophy and one hour of Anatomy each day. I really enjoyed the Philosophy class. Our teacher was so intelligent and when he looked at you, it felt like he was seeing into your soul.

In the afternoon there was an hour and a half of Hatha yoga. Hatha yoga is more relaxed than Ashtanga yoga. Ashtanga yoga is a dynamic, powerful yoga with 75 poses that are completed in a fixed order. Hatha Yoga is more classical and has a focus on holding each pose for longer.

Following the session of Hatha yoga there was an hour of meditation.

After each intensive day a vegetarian dinner would be served. By law, Rishikesh is a vegetarian city so no meat is to be seen or brought anywhere.

Rishikesh is a holy city and there are a lot of Indian tourists as well as westerners travelling there. There are many monkeys everywhere trying to steal your food (so don’t walk around with food in your hands). The monkeys would even steal ice creams from children without being aware of the sorrow they caused the small ones. Cows walk freely on the streets everywhere. Nobody is bothered enough to move them. Although if you see one coming make sure to move out of the way, I had one stand on my toe which hurt a lot. 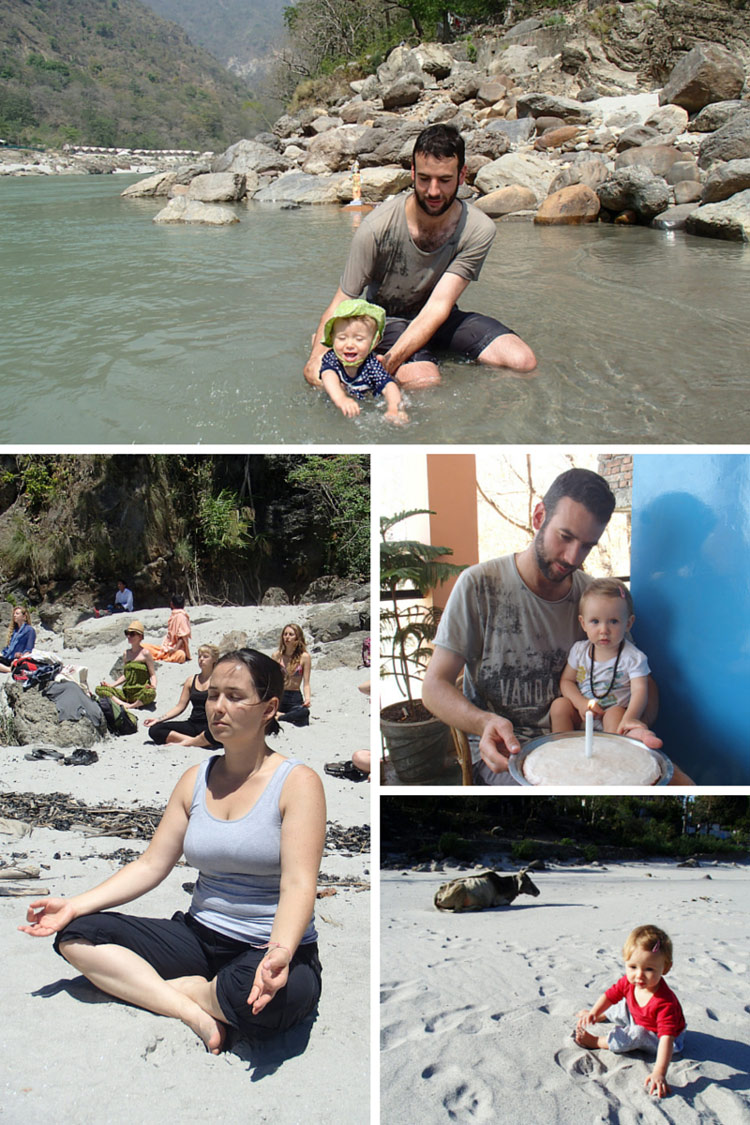 I spent most of the days at the Asram (Yoga School), except Sundays which I spent with my husband and daughter. To fill in the days while I was training David usually took Nivi to the beach swimming, or walking in the city, or to cafe’s to drink mango lassis. David found it easy to talk with local people – they were so open and friendly. They were enamoured by our blonde blue-eyed little one. Always wanting to cuddle and take photos of her.

Nivi was sick a few times, but there was a good local doctor who gave her some natural (Ayurvedic) medicine which helped. We were all sick at some stage, it’s impossible not to get Delhi Belly when you’re in India

The last day was a good day. There was a ceremony by the river with lots of candles, praying and singing and we were all given a certificate.

In the last week, we practiced teaching yoga but I think it will take me some more practise to become a good teacher. After four weeks of intensive yoga practise, I felt really good – both physically and mentally.

What I’ve learned, is that it is important to breathe properly when you do yoga, the breathing technique is called Ujjayi breathing and it sounds like an ocean breath coming from deep inside you. Meditation is also new to me, but works really well with yoga, both before and after, to still your mind. 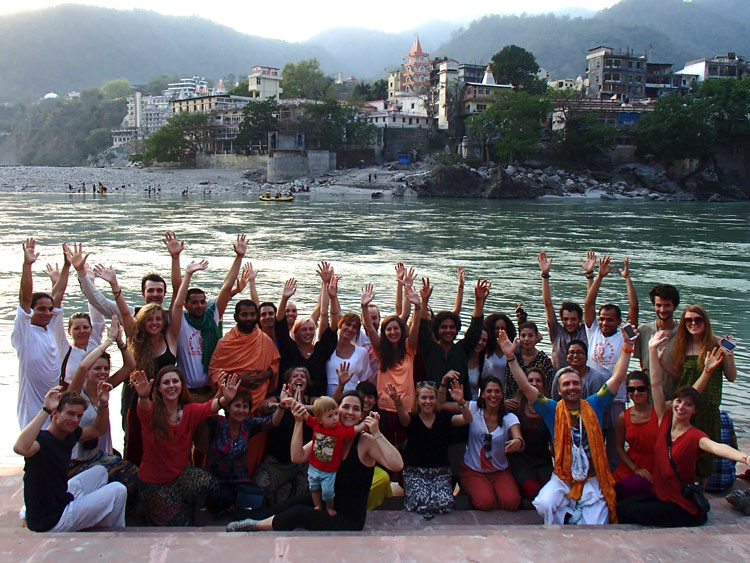 If you really like yoga, or would like to learn it, Rishikesh, or India, is the place to go. Learning yoga there feels so authentic. I would recommend it any time.

If you’re interested in learning more you can find more information on their websites:

Do you do yoga? How has it changed your outlook?