Hi there, tricks are good.

So tell us about this animated sketch you’ve just released?

Well firstly, it lives on the Internet and you can legally watch it online for free if you have a spare 5 minutes. Secondly, it was made with the financial and moral support of SBS and Film Victoria. Thirdly, it’s a sketch show but there are still some ongoing narrative threads and lots of Easter-eggs. 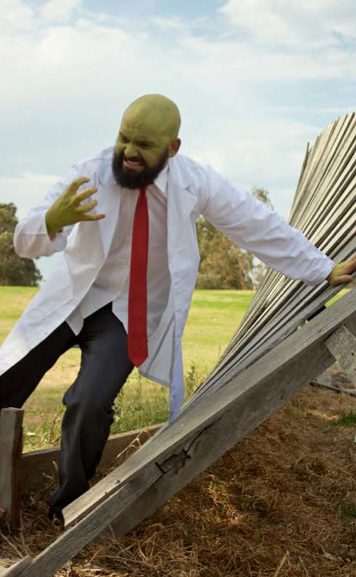 You are the creator, but also perform various character voice-overs for Suspect Moustache. Control freak or passionate artist?

Oh it’s totally both. I’ve been lucky enough to do voice over for other cartoons before this, so I would like to think I’ve got the skill-set and experience, but I suppose micro-managing and ego still factor into it. To be fair though, a large part of the equation is also logistics; I can do more voices for less money, I can stay late if I need to, I can come in for a re-record without much hassle, and I usually take my own direction well. What I’m trying to say is: I’m cheap and I don’t seem to mind wasting my time.

Where’d the name come from?

It was a non-sequitur that I wrote down thinking it might be a punchy title for a band or a web-comic, but as I had neither of those things at the time of pitching a sketch show to SBS, it found a home there.

The longer answer is that animation is more conducive to the fantastical whims of the imagination as the medium, which is traditionally aesthetically pleasing, permits levels of storytelling that are impractical if not impossible to portray with live action. The short answer is that I fucking love cartoons so I made one.

Yellow. It’s many things. Mostly a colour. But also, many, many more things. After the orange was named for its colour, “Yellow” must surely have been a strong contender for what would eventually be known as the lemon. So yellow is also a failed fruit title. Yellow is somehow associated with cowardice. Not sure how that came about. Maybe because it’s like a paler red, and red was associated with blood, which is a life-force, so a watered-down version of that was thereby bad? Or maybe because some cowards traditionally piss themselves when scared and wee is often though of as yellow? To which I say: everyone should increase their water intake. That’s 3 things. Is that enough to be considered “many” things? Probably not, eh. Oh! It’s a shit Coldplay song. 4 things. Oh! Despite being a shit Coldplay song, it’s also Coldplay’s best song. 5 things.

Was it difficult getting your work out there?

What are the plans for the future of Suspect Moustache?

Well I dunno, these things take baby-steps. And as we all know, every step a baby makes takes a tonne of paperwork, so that’s another ripping analogy from old Lapham here. But yeah, I dunno, we’ll hopefully be able to make some more episodes online and on television.

Who would win in a to-the-death battle between Spiderman and Batman?

This is a clearly a trick question, because neither Batman nor Spider-Man would take a life. What an odd question from you though. Please answer the following question to prove you’re not a spambot designed by a super villian…

If you found a Doomsday Device on the street, would you:

a) Demand a ransom from the government(s)?
b) Give it a curb-stomp, just to see if it works?
c) Return it to the address marked on the side?

For more of Fabian’s work, you can head over to:

Type to search or hit ESC to close
See all results